Once again the magnificent Long Room of the Honourable Artillery Company played host to our sold out New Year Luncheon.

The day started with excitement as a brand new Bentley Continental GT pulled into the HAC grounds being driven by Mr Chris Thompson. Chris works for Bentley Motors as a Materials Development Engineer and is the first student of TFT Wood Experts to pass his Level 6, Masters Level in Wood Science. The Bentley was parked in front of the Georgian House entrance where both David Hopkins (TTF) and David Howard (LHC) presented Chris with his Diploma followed by many photos. 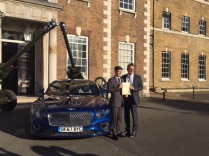 Guests started to arrive for the drinks reception from 11:30am and soon filled both the Medal Room and the Court Room to enjoy a drink and Network. This was followed by a well-received Lunch which included the London Hardwood Clubs traditional Steak and Kidney pie.

Lunch was followed by the President’s Speech in which David Howard started by thanking the HAC staff for the great food and service, the committee for their hard work and dedication to the club and the members for their continued support of the London Hardwood Club. The President also commented on the changes within the committee, first thanking Eva Lamorgese for all her hard work during her time on the committee and wishing her all the best for the future, then welcoming Rupert Walker (Timberlink International) and James White (James Lathams) to their new roles on the committee.

The President then spoke about the quality of the guest speakers throughout 2017, he thanked them all again for giving their time to the London Hardwood Club and our members. Four of the speakers were present at the lunch and were warmly applauded.

The President then commented on how the UK are leading the way in preventing illegal timber entering Europe and that we can all be proud to be a part of the Hardwood Timber Industry.

The President’s speech was followed by the guest speaker, former Light Heavyweight boxing champion Mr John Conteh MBE. John is a great guy and shared many funny memories from his life and his boxing career which kept everyone entertained. At the end of the Luncheon John stayed behind to mingle with our guests and many photos were taken with John and his WBC champion Belt. He was a big hit (pardon the pun) with our guests. 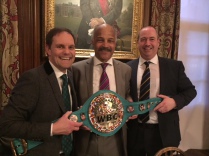 The raffle was sponsored by 17 member companies who had provided a fund of £1700.00 which was used to purchase an excellent range of prizes. The generosity of our guests was outstanding, Ticket sales raised £2800.00 which was divided equally and donated to the TTBS and MacMillan Cancer Support, two very worthwhile charities.

After lunch the networking continued as many members ‘following tradition’ moved on to Bangers. With the dining area cleared to make room for our members and extra staff behind the bar, the networking went on way into the late evening. It was a great way to round off a most enjoyable day.

We are located at:

Our meetings are held at the following location or via zoom while Covid 19 restrictions apply : The Globe 83 Moorgate  London  EC2N 6SA

If you have any queries or wish to make an appointment, please contact one of the team

Get social with us.